Environmental pressure, things like natural disasters, flooding, limited land to farm, is only one of many potential ways that can lead to cultural adaptations. Others include technological innovation (e.g., printing press, electricity) and contact with other cultures (immigration or colonization), which may promote or inhibit changes in cultural practices. Through cultural transmission, goods and services may be exchanged by two cultures, as well as values, languages, and behavior patterns. This section will review three main methods for cultural transmission. 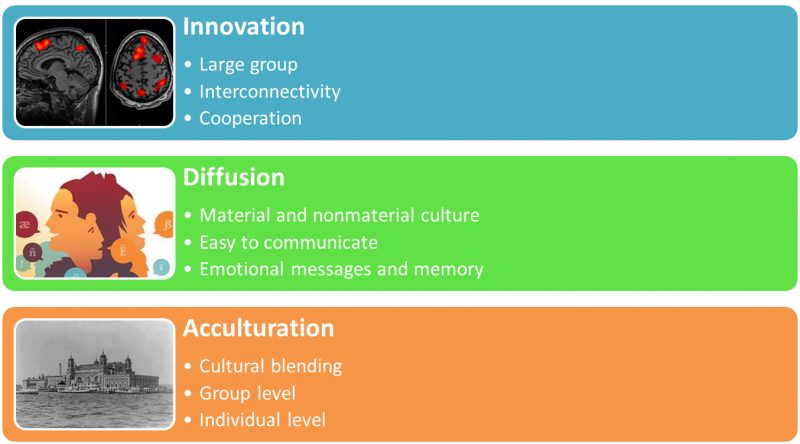 Earlier in the chapter we learned that large groups with a high degree of interconnectivity are more innovative and less likely to lose knowledge. Innovation includes combining existing information to create something new. In a large group or population, it is highly likely that one person will make a new discovery that will be adopted or shared with the group but only if the innovation is useful (Heine, 2016). Consider the transitions from foraging to agriculture or more recent transitions from email to text messages – innovations that have been adopted, shared and transmitted across the globe.

Diffusion is the spread of material and nonmaterial culture and relates to the integration between cultures and within cultures. We learned earlier that material culture refers to tangible objects or belongings of a group. For example, Middle-class Americans can fly overseas and return with a new appreciation of Thai noodles or Italian gelato. The diffusion of nonmaterial culture (norms, values and beliefs) has accelerated as access to television and the Internet has brought the lifestyles and values portrayed in sitcoms into homes around the globe. Twitter feeds from public demonstrations in one nation have encouraged political protesters in other countries. When this kind of diffusion occurs, material objects and ideas from one culture are introduced into another. Ideas that are easy to communicate are more likely to spread and emotional messages will spread more quickly. If an idea or a message challenges our assumptions or expectations but seems reasonable it is also more likely to be shared and communicated (known as the minimally counterintuitive idea).

Acculturation is the process of social, psychological, and cultural change that happens when cultures come into contact with one another and blend through positive or negative interactions. Acculturation can be experienced at the level of a group (e.g., war, political domination, colonization) and at the level of the individual (e.g., dating after divorce). The process of acculturation may be brutal, very distressing or only mildly uncomfortable but it is a normal part of our adaptation to things that are new to us. Some of the most noticeable effects of acculturation often include changes in food, clothing, and language. We discuss acculturation and culture shock more fully in Chapter 13.