Although we all define ourselves in relation to these three broad categories of characteristics—physical, personality, and social – some interesting cultural differences in the relative importance of these categories have been shown in people’s responses to the TST. For example, Ip and Bond (1995) found that the responses from Asian participants included significantly more references to themselves as occupants of social roles (e.g., “I am Joyce’s friend”) or social groups (e.g., “I am a member of the Cheng family”) than those of American participants. Similarly, Markus and Kitayama (1991) reported that Asian participants were more than twice as likely to include references about other people in their self-concept as did their Western counterparts. This greater emphasis on either external or social aspects of the self-concept reflects the relative importance that collectivistic and individualistic cultures place on an interdependence versus independence (Nisbett, 2003).

Interestingly, bicultural individuals who report acculturation to both collectivist and individualist cultures show shifts in their self-concept depending on which culture they are primed to think about when completing the TST. For example, Ross, Xun, and Wilson (2002) found that students born in China but living in Canada reported more interdependent aspects of themselves on the TST when asked to write their responses in Chinese, as opposed to English. These culturally different responses to the TST are also related to a broader distinction in self-concept, with people from individualistic cultures often describing themselves using internal characteristics that emphasize their uniqueness, compared with those from collectivistic backgrounds who tend to stress shared social group memberships and roles. In turn, this distinction can lead to important differences in social behavior.

One simple yet powerful demonstration of cultural differences in self-concept affecting social behavior is shown in a study that was conducted by Kim and Markus (1999). In this study, participants were contacted in the waiting area of the San Francisco airport and asked to fill out a short questionnaire for the researcher. The participants were selected according to their cultural background: about one-half of them indicated they were European Americans whose parents were born in the United States, and the other half indicated they were Asian Americans whose parents were born in China and who spoke Chinese at home.

After completing the questionnaires (which were not used in the data analysis except to determine the cultural backgrounds), participants were asked if they would like to take a pen with them as a token of appreciation. The experimenter extended his or her hand, which contained five pens. The pens offered to the participants were either three or four of one color and one or two of another color (the ink in the pens was always black). As shown in Figure 1 and consistent with the hypothesized preference for uniqueness in Western, but not Eastern cultures, the European Americans preferred to take a pen with the more unusual color, whereas the Asian American participants preferred one with the more common color.

Through these and other experiments two dimensions of self-concept emerged, the independent construal (concept) and the interdependent concept. Western, or more individualist cultures, view the self as separate and focus on self, independence, autonomy and self-expression are reinforced through social and cultural norms. This is the independent self-concept. Non-western or collectivistic cultures view the self as interdependent and inseparable from social context and individuals socialized to value interconnectedness consider the thoughts and behaviors of others. Fitting in is valued over standing out. 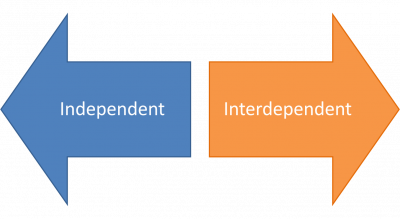 As well as indications of cultural diversity in the content of the self-concept, there is also evidence of parallel gender diversity between males and females from various cultures, with females, on average, giving more external and social responses to the TST than males (Kashima et al., 1995). Interestingly, these gender differences have been found to be more apparent in individualistic nations than in collectivistic nations (Watkins et al., 1998).