Jensen eats so much candy that is he is full but he still wants more candy so he makes himself throw up in the bathroom and then eats more candy. Nobody sees him do this and it does not make him feel bad (adapted from Hadit et al., 1993). Jasmine wants to play on a swing in school but there is already another little girl playing on it. Jill pushes the little girl off the swing so that she can play instead. The little girl starts to cry. Nobody sees Jasmine do this (adapted from Turiel, 1979). 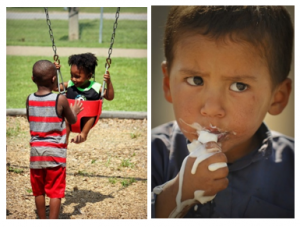 Which of these stories would you consider moral or immoral? Why? How do we learn right and wrong? These are just two of the many questions that psychologists consider when exploring the concept of morality.

As humans, our behaviors are guided in part by a set of social norms about morality that forms a basic and important part of our culture. Morality refers to a system of beliefs about what is right and good compared to what is wrong or bad. Morals vary dramatically across time, place and across cultures. There is a great deal of cultural variation in morality, and social norms relate to a wide variety of behaviors. Some cultures approve of polygamy and homosexuality, whereas others do not. In some cultures, it is appropriate for men and women to be held to different standards, whereas in other cultures, this is seen as wrong. Even things that seem completely normal to us in the West, such as dancing, eating beef, and allowing men to cook meals for women, are seen in some other cultures as immoral. Morals are held and agreed to by all members of the culture. In most cases, morals are upheld through rules, laws, and other types of sanctions for their transgression. We give rewards to people who express our preferred morality, for instance, in the form of prizes, honors, and awards, and we punish those who violate our moral standards. We generally attribute positive evaluations to people we consider moral (e.g., trustworthy, empathetic, friendly) and negative evaluations of people we consider to be immoral (Bastian, Laham, Wilson, Haslam, & Koval, 2010).

At the end of the chapter, you should be able to: