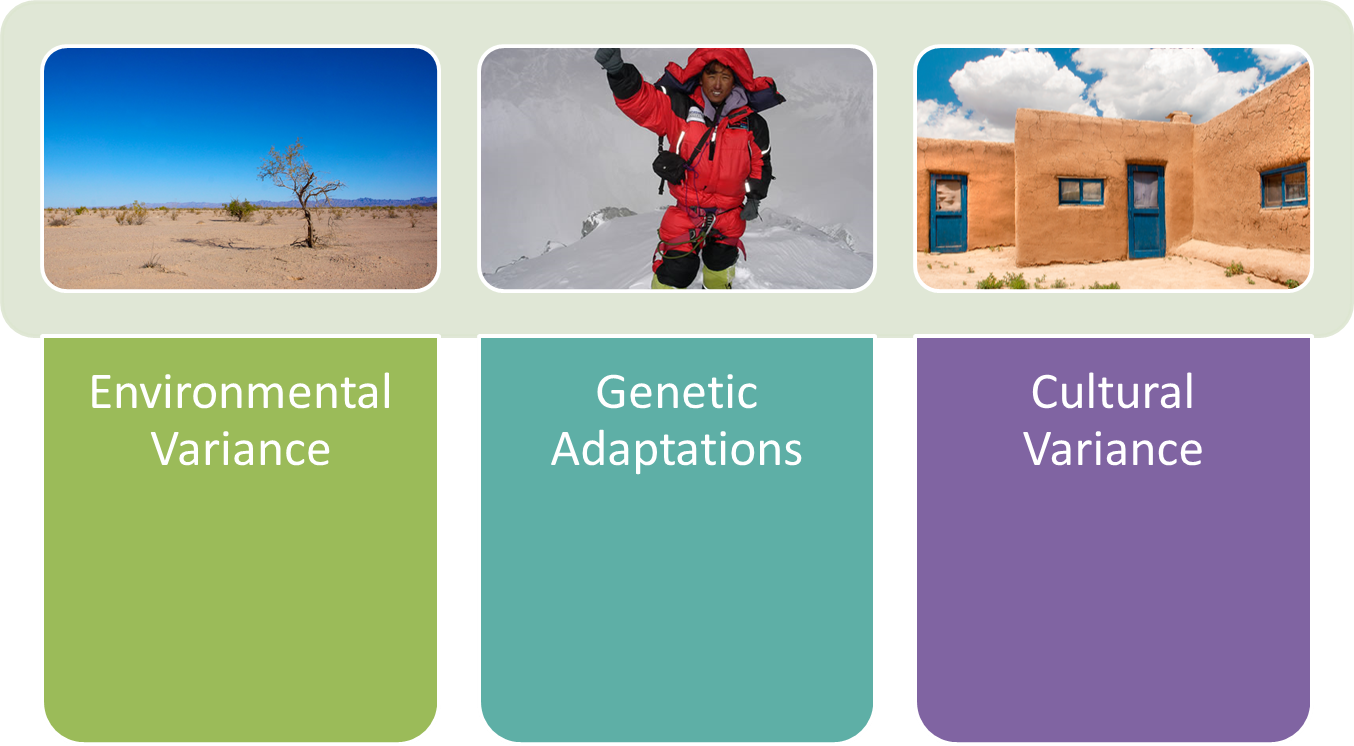 Modern humans are genetically very similar (genotype) but exhibit very different physical characteristics (phenotype). It is generally accepted that genetic and cultural diversity is geographically and ecologically structured, which means that people from particular regions resemble each other more than they resemble people from other regions. As modern humans migrated to geographic and climatic regions that differed from the lands of their ancestors, they met new environmental challenges. Group variation arose because different groups encountered different environments and conditions (Boyd and Richerson, 2011b). These new environments led to genetic changes that enhanced survival for group members, which were then transmitted to offspring across generations. Moreover, these new, often harsh environments forced humans to create new ways of coping, learning, living and raising their offspring that also enhanced survival.

Environmental variance refers to differences among groups because the environment is different. Stressors can be abiotic (e.g., climate, UV radiation or high altitude), biotic (e.g., disease), or social (e.g., war and psychological stress). Evidence is growing that environmental stressors (or pressures) can cause genetic variations (i.e., changes in genes). You are probably familiar with at least a couple of genetic adaptations brought about by environmental pressures.

Population migration to high altitude has altered red blood cells to accommodate the reduced oxygen levels at high altitude (Beall, 2004). Malaria is a biotic example of an environmental variant. Malaria is a disease carried by mosquitoes and affects thousands of people each year. A change in red blood cell shape (sickle or semicircle) is a genetic adaptation present in tropical climates to protect individuals from malaria but in other environments the adaptation can be quite harmful to a person. Sickle cell anemia is a disease that has emerged because the once advantageous adaptation causes joint inflammation and pain in people when expressed in other environments.

As mentioned earlier, groups living in new environments invented new tools and new ways of doing things to adapt to ecological conditions and pressures. Cultural variance refers to different behaviors among groups as a result of different learning, coping and living. Cultural adaptations can occur at any time and may be as simple as putting on a coat when it is cold or as complicated as engineering, building, and installing a heating system in a building. Consider contemporary hunter-gatherer societies in the Arctic and Kalahari. These groups inhabit hostile environments that are separated by thousands of miles but they have not developed massive distinct genetic adaptations to these environments. They are successful because of cultural adaptations to their unique habitations.

In addition to environmental variations and ecological pressures, cultural adaptations may be shaped by access to arable land, sustainable strategies (e.g., fishing, hunting, agriculture) and sources of food. In other words, resources available to the population. For example, the people of India revere cows and believe that eating a cow is a terrible act, which might seem strange to people in other countries. Cows in India are considered sacred. Cows are viewed as more than just an animal because they provide milk which is a precious resource. In order to ensure the milk is always available cows must be kept alive and well cared for. The cow is a food source, even if not in the way that, say, an American or European would view it. The sacredness of the cow was a cultural adaptive measure by the Indian people to keep an important, renewable resource protected.

Another example of a cultural adaptation, and the use of local resources, is building a shelter or a home. In the southwest United States, before air conditioning (and even with air conditioning) homes were built to survive the hot, dry climate. The bricks were made from abundant dirt and used few windows, which kept heat in during the winter and out during the summer. The flat roof construction catches the rainfall that is precious and scarce in the southwest. To those in other parts of the world it is just a structure, but to the people of the southwest it meant survival.

Adaptations may be environmental or cultural and are likely the result of differences in ecology, resources and people (Crezana, Kolodny, & Feldman, 2017). Van de Vliert (2011) examined these components and their impact on ingroup favoritism (preferences for people who are similar to us that results in disproportionate shares of resources). Using data from almost 180 countries, ingroup favoritism was highest in cultures with the lowest income and harshest, most demanding climates (e.g., extreme heat or cold) and lowest in cultures with high national income and demanding climates. Ecological stress and scarce resources created social norms that favor some people over others. By examining ecology, national wealth and behaviors collectively, we can see the relationship between these factors and cultural adaptations.

Cultural similarities can be explained by adaptations of different groups to similar environmental conditions and cultural variations can also be explained by changing environmental conditions. Since environmental changes were not predictable, cultures changed in many different directions. Cultures that were once similar could become dissimilar with selective pressures and ecological distress and the opposite could also happen, cultures that were once different could become similar. The continual development of culturally transmitted knowledge and skills enables people to thrive in new environments.