Some of the most important and fundamental moral principles seem to be universally held by all people in all cultures and do not change over time. It has been found that starting at about age 10, children in most cultures come to a belief about harm-based morality—that harming others, either physically or by violating their rights, is wrong (Helwig & Turiel, 2002). Some research suggests that morality development begins much earlier in human development. Hamlin and colleagues used a puppet morality play in an experiment with infants and toddlers that found children preferred people who help others reach a goal (prosocial behaviors) and avoided people who were harmful, or who get in the way of others reaching a goal. As early as 3 months age, humans are evaluating the behaviors of others and assigning a positive value to helpful, cooperative behaviors (Hamlin et al., 2007; Hamlin & Wynn, 2011) and negative values to harmful or selfish behaviors. These fundamental and universal principles of morality include individual rights, freedom, equality, autonomy and cooperation.

The theory that has the most cross-cultural empirical support is Kohlberg’s Stages of Moral Development, a cognitive development theory inspired by the work of Piaget. Moral development refers to the changes in moral beliefs as a person grows older and gains maturity.

According to Kohlberg’s theory, morality is based on the concept of equality and reciprocity of helping that can be predicted at certain ages. To develop this theory, Kohlberg posed moral dilemmas to people of all ages; however, they were all White, males from the United States. One of Kohlberg’s best-known moral dilemmas is commonly known as the Heinz dilemma and participants were asked to decide what Heinz should do.

In Europe, a woman was near death from a special kind of cancer. There was one drug that the doctor’s thought might save her. It was a form of radium that a druggist in the same town had recently discovered. The drug was expensive to make, but the druggist was charging ten times what the drug cost to make.  He paid $200 for the radium and charged $2000 for a small dose of the drug. The sick woman’s husband, Heinz, went to everyone he knew to borrow the money, but he could only get together about $1000, which is half of what it cost.  He told the druggist that his wife was dying and asked him to see it cheaper or let him pay later. The druggist said, “No, I discovered the drug and I’m going to make money from it.” So, Heinz got desperate and broke into the man’s store to steal the drug for his wife. Should the husband have done that?  (Kohlberg, 1969, p. 379).

Each level is associated with increasingly complex stages of moral and cognitive development. According to Kohlberg, an individual progresses from the capacity for pre-conventional morality (before age 9) to the capacity for conventional morality (early adolescence), and toward attaining post-conventional morality (once formal operational thought is attained), which only a few fully achieve. Kohlberg placed responses that reflected the reasoning that Heinz should steal the drug because his wife’s life is more important than the pharmacist making money in the highest stage. The value of a human life overrides the pharmacist’s greed. It is important to realize that even those people who have the most sophisticated, post-conventional reasons for some choices may make other choices to avoid getting into trouble (e.g., pre-conventional reasons). 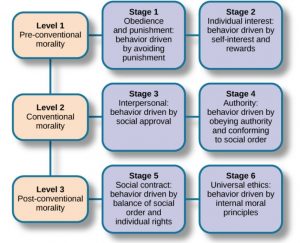