The forces that generate natural hazards can be internal or external to the Earth. The internal forces arise within Earth. Examples are the internal heat of the Earth, the movement of the Earth’s plates that produces compression or tension and the movement of magma in the crust. External forces come from the Sun or the moon and influence weather and climate. For example, uneven heating from the Sun causes wind circulation around the atmosphere and different pressures, which can generate weather patterns and extreme weather events. The gravity between the moon and the Earth causes tides. The interactions between these forces and the Earth’s spheres control most natural processes.

Natural hazards controlled by external forces can show seasonality, a correlation with seasons. The United States has more tornadoes than the rest of the world combined, yet they most only occur in the spring and early fall. Landslides are more prone in the spring when the snow melts, and the saturated ground causes unstable slopes to slide. Wildfires are frequent in the middle of the summer and early fall when the land is dry, and afternoon thunderstorms in arid climates produce lightning with no precipitation. Hurricane season in the Northern Hemisphere peaks between August and September when the Atlantic Ocean is warmest.

Earth hazards are natural phenomena capable of causing harm to humans. These hazards include earthquakes, tsunamis, hurricanes, floods, droughts, landslides, volcanic eruptions, extreme weather, lightning-induced fires, sinkholes, coastal erosion, and comet and asteroid impacts, among others. But why do they exist in the first place? Can natural disasters serve a purpose in nature?

Our human history has been shaped by nature, perhaps by natural disasters. Hazardous events can significantly alter human populations and drive human migrations, that is, they pose risk. A risk is the likelihood and cost of a hazard or group of hazards. When considering risks we talk about two factors:

The risks increase as populations expand into hazardous areas or concentrate in already inhabited areas. Risks are also connected to socio-economic variables. Usually, the most vulnerable populations are historically underserved. The occurrence of natural disasters in an underprivileged community can exacerbate inequitable social and economic conditions, this has given rise to the term environmental justice. A related concept is climate justice, the acknowledgment that the impacts of climate change are not felt equally around the globe. The social, economic, public health, and other adverse impacts are harder for underserved or marginalized populations (e.g., low-income communities, people of color, indigenous peoples, people with disabilities, older or very young people, women, etc.) Advocates for climate justice strive to have these inequities addressed head-on through long-term mitigation and adaptation strategies.

For more on these topics read What is climate justice and How inequality grows in the aftermath of hurricanes, both published on the Yale Climate Connections Website.

To understand how to prepare for a natural hazard, scientists conduct a risk assessment for a specific geographic area. From an environmental perspective, we define the risk of a potential hazard as the probability of a disaster, or the likelihood, multiplied by the consequence to the human environment, or cost.

It is essential to determine the potential risk a location has for any particular disaster to know how to prepare for one. One of the limiting factors of risk is knowing the probability of a disaster. Too often, scientific data is lacking enough information to determine how often a disaster occurs in a particular location. This is true with geologic hazards, where geologic time is vastly more extensive than the age of scientific reasoning.

There is also an inverse relationship between the magnitude of an event (energy released) and its frequency (intervals between episodes). For example, the more earthquakes that occur in a particular location, the weaker they tend to be. That is because built-up energy is slowly being released at a relatively constant rate. However, if there are long intervals between one earthquake and the next, the energy can build and can ultimately produce a stronger earthquake. That is the problem with earthquakes along the Wasatch Front of Utah. The interval or frequency between earthquakes tends to be 1,500 years, so the magnitude tends to be high because of the built-up energy. At some point, we are going to want to get this earthquake over with because the longer it waits, the worse it will be.

What is the difference between a natural hazard, a disaster, or a catastrophe? A is any natural process that poses a direct threat to the human environment. The event itself is not a hazard; instead, a process or event becomes a hazard when it threatens human interests. A disaster is the effect of a hazard on society, usually as an event that occurs over a limited time in a defined geographic area. We use the term disaster when the interaction between humans and a natural process results in significant property damage, injuries, or loss of life. Finally, a catastrophe is a massive disaster that significantly impacted the human environment and requires a significant expenditure of time, money, and resources for response and recovery.

Humans cannot eliminate natural hazards but can reduce their impacts. We can reduce the loss of life, property damage, and economic costs by identifying high-risk locations and minimizing human habitation and societal activities in them, improving construction methods, developing warning systems, and recognizing how human behavior influences preparedness and response. This is the function of forecasting, predicting, and warning when a disaster is coming. Another way in which we can reduce the impacts of disasters is by refining our knowledge about them.

Earth scientists are continually improving estimates of when and where natural hazards occur. Since hazards are statistically predictable, it becomes essential to develop a warning system. , such as weather predictions, state that it will occur at a specified time, date, and intensity. It is like saying, “a major dust storm will reach Phoenix at 4:30 PM for the commute home.” A states a probability of something occurring, such as “5 percent of showers today.” Forecasts are much broader than predictions.

When a natural disaster event is about to happen or has occurred, we have set up a system up to alert the public. A watch is issued when the conditions for an event are right. If a severe thunderstorm is strong enough and is rotating, a tornado may form. Alternatively, if an earthquake with a magnitude of 7.5 strikes somewhere in the ocean, a tsunami watch may be issued because it was strong enough to generate one. However, a watch does not necessarily mean that it will occur. A warning is sent out to the areas that could be impacted if a tornado is spotted on the ground or an ocean sensor records an approaching tsunami.

The financial and human cost of natural disasters is rising.

To help prepare for these disasters, better efforts will be required, such as proper building and zoning codes, first responder preparedness, and public education.

As humans over-populate the Earth and live in more hazard-prone areas, disasters seem to be getting worst: affecting more people and costing more money. Over the last 70 years, the world’s population has tripled to 797 billion. World population projections suggest that the human population will reach 9.7 billion by 2050 (Worldmeter.info).  Our increased population has caused air quality problems, reduced availability of clean water, increased the world’s extreme poverty rate and has made us more prone and vulnerable to natural hazards.

How we choose to build our cities will significantly determine how many lives we save in a disaster. For example, we should not be building homes in areas that are prone to landslides, liquefaction, or flash floods. Instead, these places should be open space, such as parks, golf courses, or nature preserves. This is a matter of proper zoning laws which are controlled by the local government. Another way we can reduce the impact of natural disasters is by having evacuation routes, disaster preparedness and education, and building codes so that our buildings do not collapse on people.

Natural hazards abound in Arizona. At the top of list: flash floods, severe weather, landslides and debris flows, earthquakes, and earth fissures. Other hazards, include: problem soils – a multi-billion dollar problem annually in the U.S.; volcanism – Arizona has three active volcanic fields and 1000s of extinct volcanoes, some of which are prone to collapse; locally, radon and arsenic can threaten health and human life. (Source: AZGS https://azgs.arizona.edu/center-natural-hazards) 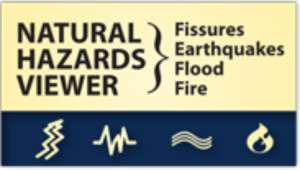 Visit the Center for Natural Hazards to learn more about Arizona’s hazards.

Statement that under specific circumstances something will occur, leading to recognition of cause and effect.

Description of what may happen in the future, usually stated in terms of propability

The identification of actions that will avoid, lessen, or compensate for anticipated adverse environmental impacts