The most common system used to classify climatic zones is the Köppen classification system. This system is based on the temperature, amount of precipitation, and the year when precipitation occurs. Since climate determines the type of vegetation that grows in an area, vegetation is often used as an indicator of climate type.

A climate type and its plants and animals make up a biome. The organisms of a biome share specific characteristics worldwide because their environment has similar advantages and challenges. The organisms have adapted to that environment in similar ways over time. For example, distinct cactus species live on different continents, but they have adapted to the harsh desert in similar ways. 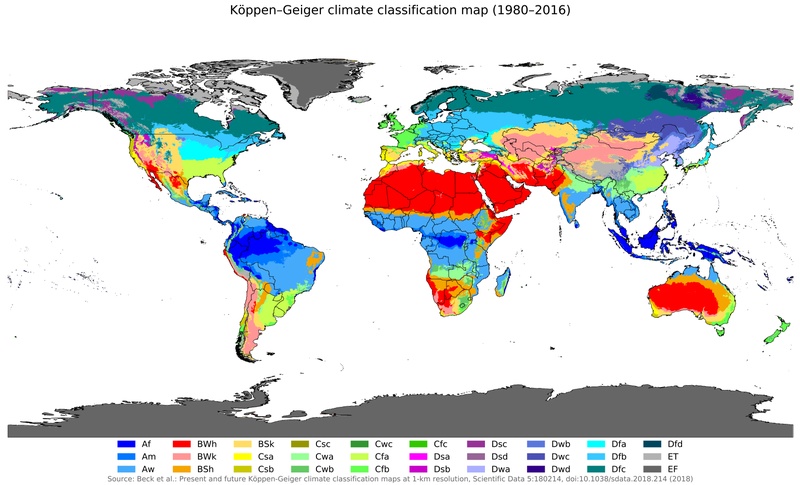 The Köppen classification system was developed by the German climatologist, Wladimir Köppen in 1918. The classification system focuses on the average monthly and annual temperature and precipitation totals for a location. The Köppen classification system recognizes four major climate groups based on temperature values (identified by the capital letters A, C, D, and E), and the fifth based on moisture (identified by the capital letter B), to create global climate patterns. The major climate groups can then be subdivided into more specific categories based on a combination of temperature and moisture patterns for any region in the world. A newer system called the modified Köppen classification system is used today after several modifications by geographers and climatologists over time. The modified version still has the five major climate categories, which are broken down into fourteen subcategories. The modified version also has a new category for “highland,” represented with the capital letter H, and focuses on mountainous regions.

The modified Köppen classification system is straightforward and quick to identify global and regional climates. The first letter (always a capital letter), represents the primary climate type. The second, lower-case letter identifies the precipitation patterns for a location. Finally, the third letter, again in the lower case, is used to identify the temperature patterns for that location.

There are a variety of resources available from NOAA to analyze climate data. (Visualizing Climate Data | NOAA Climate.Gov, n.d.)

Tropical climates are found between 15 to 25 degrees north and south of the equator. These climates tend to have warm temperatures with every month averaging 18 degrees Celsius (64 degrees Fahrenheit), with abundant precipitation, approximately 150 cm (59 inches) per year. This climate group is broken down into three categories, based on precipitation.

Tropical wet climates are found between 10 degrees north and south of the equator. These regions have almost no annual temperature variation and tremendous amounts of rainfall year-round, between 175 and 250 cm (65 and 100 inches). These conditions support the tropical rainforest biome, which is densely packed, with broadleaf evergreen trees. These regions tend to have the highest number of species or biodiversity of any ecosystem.

Tropical monsoon climates are defined by seasonal monsoonal wind patterns in southern Asia, northeastern South America, and western Africa. The monsoon tends to be strongest in regions where strong monsoonal winds blow from sea to land, such as India. These climates tend to have incredible amounts of precipitation (over 75 centimeters or 30 inches) for two or three months, followed by drier conditions for the rest of the year. Rainforests can still grow in these regions because most of the year supplies abundant moisture.

Tropical savanna climates lie between about 5 to 20 degrees north and south latitude and are defined by dry winters and very wet summers. During the summer months, the Intertropical Convergent Zone (ITCZ) migrates into the region, bringing vast quantities of moisture (90 to 180 centimeters or 35 to 70 inches annually). During the winter months, the ITCZ migrates away from the region, bringing arid conditions. The average annual temperature ranges are roughly 3 to 8 degrees Celsius (5 to 15 degrees Fahrenheit).

Arid deserts tend to be found between 15 and 30 degrees north and south, where warm, dry air sinks because of subtropical high zones. Vast deserts, such as the Sahara or Gobi deserts, make up roughly 12 percent of the Earth’s landmass. The typical weather is sweltering summer days and chilly winter nights. Although annual rainfall is less than 25 cm (10 inches), precipitation tends to fall during two seasons.

Semi-arid deserts, also called steppe, are found in continental interiors or rainshadow regions. Semi-arid deserts receive between 20 and 40 cm (8 to 16 inches) of rain annually. In the United States, the Great Plains, portions of the southern California coast, and the Great Basin are semi-arid deserts.

Mediterranean climates are found on the western sides of continents between 30 to 45 degrees north and south. There are several characteristics of Mediterranean climates. Most of their annual precipitation occurs during the winter months with totals of 30 to 90 cm (14 to 35 inches) and hot and dry summer months. Because of their relative location near the subtropical high-pressure zones, these climates tend to have plenty of sunshine during the summer.

Humid subtropical climates are found mostly on the eastern sides of continents. Precipitation occurs throughout the year with annual averages between 80 and 165 cm (31 and 65 inches). Summer days are humid and hot, from the lower 30s up to 40 degrees Celsius (mid-80 is up to 104 degrees Fahrenheit). Afternoon and evening thunderstorms are frequent as warm tropical air passes over the hot continent. Winters are mild, but midlatitude storms, called cyclones, may bring substantial amounts of precipitation. The southeastern United States, with its hot humid summers and mild, but frosty winters, is typical of this climate zone.

Marine west coast climates follow the coasts of continents, between 40 degrees and 65 degrees north. Common regions with this climate include the Pacific Northwest in the United States, western and central Europe, New Zealand, and southeast Australia. Ocean winds bring mild winters and cool summers, with daily and annual temperature ranges being relatively small. Precipitation tends to occur year-round, although summers are drier as the jet stream moves northward. Low clouds, fog, and drizzle are typical.

Humid continental climates are found around the polar front (roughly 60 degrees north) in North America and Europe. In the winter, midlatitude cyclones bring chilly temperatures, snow, and prolonged winters. In the summer, westerly winds bring continental weather and warm temperatures. The average summer temperatures are often above 20 degrees Celsius (70 degrees Fahrenheit). The region typically has deciduous trees, which protect themselves in winter by losing their leaves.

Subpolar climates are dominated by continental polar air, over frigid continents. Snowfall is light, but cold temperatures keep snow on the ground for months. Most of the approximately 50 cm (20 inches) of annual precipitation falls during summer cyclonic storms. The sun’s rays’ angle is low, but the sun is visible for most or all of the day during the summer. These continental regions have extreme annual temperature ranges. The boreal, coniferous forests in the subpolar climate are called taiga and have small, hardy, and widely spaced trees. Taiga vast forests stretch across Eurasia and North America.

Polar climates are found across the continents that border the Arctic Ocean, Greenland, upper Canada, and Antarctica. These climates tend to have bitterly cold winters and cool summers because of the sun’s low angle. The average temperature of the warmest months tends to be less than 10 degrees Celsius (50 degrees Fahrenheit). Regions with this climate tend to be quite dry, with annual precipitation less than 25 cm (10 inches). Most of the precipitation from this climate occurs during the summer months but stay on the ground year-round. Data shows that the polar regions are warming faster than any other climate group because of anthropogenic climate change. This causes places like Greenland to melt rapidly while creating a prolonged, ice-free North Pole during the summer months.

Tundra climates were first described by the type of vegetation that grew in the region. Today, the climate is defined by the 10 degrees Celsius (50 degrees Fahrenheit) isotherm, where the warmest month of the year exists for the region. This isotherm’s importance is because it corresponds to the treeline, which is the farthest limit of where trees can grow because of limited moisture and temperatures.

Temperatures in tundra climates are so cold that a layer of permanently frozen ground, called permafrost forms below the surface and can extend hundreds of meters below the surface. The average temperature of the warmest months is above freezing, so summer temperatures defrost the uppermost part of the permafrost, sometimes causing soggy conditions. In winter, the permafrost prevents water from draining downward. Although the precipitation is low enough in many places to qualify as a desert, evaporation rates are also low, so the landscape receives more usable water than a desert. Because of the lack of ice-free land near the South Pole, there is little tundra in the Southern Hemisphere.

Icecap climates are found mostly on Greenland and Antarctica and may be thousands of meters thick.   Because of their latitude and the sun’s continuous low angle, these climates have extremely low average annual temperatures, around -29 degrees Celsius (-20 degrees Fahrenheit). Precipitation is low because the air is too cold to hold significant amounts of moisture. Because of the permanent ice cover, no vegetation exits in ice cap climates

When climate conditions in a small area are different from those of the surroundings, the climate of the small area is called highland climates. Altitude mimics latitude for climate groups and was not considered in the original Köppen classification system. Climates and biomes typically found at higher latitudes may also be found in other areas of the world at high altitudes. Other factors that will influence highland climates, specifically temperature and moisture patterns, include orographic uplifting, rain shadow effects, slope and aspect of mountains, and local wind patterns.