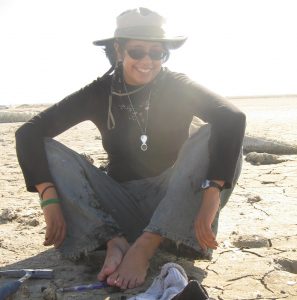 Dr. Charlene Estrada has studied geosciences in the fields of mineralogy, geochemistry, and paleontology for 15 years. In 2009, she received her B.S. in Geosciences at the University of Arizona where she worked for 3 years as a student laboratory technician at the RRUFF Project. She completed her graduate work at Johns Hopkins University, where she studied hydrothermal minerals and their role on the emergence of life, by earning an MA and Ph.D. in Earth & Planetary Sciences in 2011 and 2014 respectively. She has researched prebiotic chemistry as a postdoctoral scholar at the University of Akron, the Geophysical Laboratory at the Carnegie Institution for Science, and studied early fossils of Arizona and hydrothermal reactions at Arizona State University’s School of Earth and Space Exploration. There, her team made the top 33 in the National Science Foundation 2026 Idea Machine competition for the “Big Idea” Geomimicry. She now teaches full-time as a geosciences professor at South Mountain Community College on a year-to-year basis. 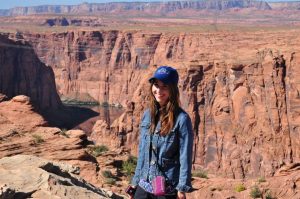 Dr. Carolina Londoño Michel has a Ph.D. in Geology from Arizona State University and holds Bachelor’s Degree in Geology and Petroleum Engineering from Colombia, where she worked in environmental geology and geology for engineering projects. She is a Geoscience faculty at Chandler-Gilbert Community College, one of the Maricopa Community Colleges. Carolina’s pedagogy is informed by place-based education, which is geographical, considering both the physical and cultural landscape of the locality. She has ample experience working in multidisciplinary teams and with people from different cultures to produce educational deliverables for the general public, for schools, and for academia. Her current focus is developing/applying best practices to integrate indigenous or local ecological knowledge into the western science curricula to create culturally responsive curricula, authentic learning environments, and innovative educational programs. 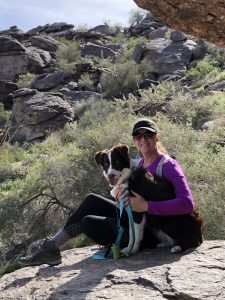 Dr. Merry Wilson is a geology professor at Scottsdale Community College, Scottsdale, Arizona. She has a B.A. and M.S. in Geology, and an Ed.D. in Education. While working on everything from paleontological excavations in the wilds of Montana to high pressure/temperature experimental labs in the bowels of science buildings during her early professional years, Merry found her passion in teaching. This led her to pursue a doctorate that focused on how her geology students learn in authentic field environments. She won the Innovation of the Year Award at Scottsdale Community College for her work featuring an artificial rock outcrop she had constructed on campus to aid her students’ learning. She has been a leader in science education, both locally and nationally, as former president of the National Association of Geoscience Teachers Southwest Section and 2-Year College Division. In her spare time, she enjoys hiking, cycling, surfing, kid-wrangling, and going backpacking with her dog, Rox.

When not teaching geology at Chandler-Gilbert Community College, a job I love with people I admire, I work as a technical writer for the Nonlinear Geophysics Group at Los Alamos National Laboratory, build energy-efficient tiny houses, and teach hands-on science to little folks in China though not the last two summers – COVID. I am a native of the Colorado Plateau – Winslow – and have worked for the BLM at the Anasazi Heritage Center in Dolores, Colorado and for the National Park Service as an interpretive ranger at Kilauea (Volcanoes National Park) and Glen Canyon/Lake Powell. I have lived and worked in Pago Pago, American Samoa and Athens, Greece. I enjoy mountain biking, hiking, travel, playing acoustic guitar badly, gardening, writing, computing, studying environmental issues focusing on sustainability and alternative architecture, & spending time with loved ones.  I believe geology should be taught both as content & a process, with a hands-on, discovery approach, & with a sense of humor.  My emphasis in geology has been on the environment and energy.