Weather is the current state of the atmosphere for a particular place at a particular time. Climate is a statistical average of weather for a specific location, over 30 years or more. Weather can change at any minute, but climate takes years, if not decades, to change. Like the weather, the climate is a complex system involving the oceans, atmosphere, lithosphere, hydrosphere, and biosphere. (What is the Difference Between Climate and Weather? | NOAA Climate.Gov, n.d.)

Millions of years ago, during the early part of the Cretaceous period, dinosaurs roamed the Earth when temperatures were much warmer than today. Geological evidence suggests that there were no ice caps at the North or South poles. Earth’s historic climates were closely tied to changes in greenhouse gases, which make up the greenhouse effect. Scientists have determined that changes in greenhouse gas concentrations currently are due to human activity, rather than other national processes.

All around the world, tens of thousands of weather stations are continuously monitoring weather conditions for their location on the planet.  (How Do Weather Observations Become Climate Data? | NOAA Climate.Gov, n.d.) The raw weather data is collected by the National Oceanic and Atmospheric Administration (NOAA) at their National Center for Environmental Information (NCEI).

Over time, this data can be overaged over the years and decades to determine what the climate is typically there. Climate norms are determined by the National Oceanic and Atmospheric Administration (NOAA) at the beginning of every new decade. (Climate Normals | National Centers for Environmental Information (NCEI) formerly known as the National Climatic Data Center (NCDC), n.d.) Climate data is critically important for decision making for a variety of sectors of the economy and across governmental and non-governmental organizations.

The climate system is comprised of five natural components: atmosphere, hydrosphere, cryosphere, land surface, and biosphere. The atmosphere is the envelope of gases that surrounds Earth, including the naturally occurring greenhouse gases that warm the planet’s surface. The hydrosphere includes all of Earth’s liquid water and gaseous water (water vapor), whereas the cryosphere includes all frozen water (ice). Note that the cryosphere is technically part of the hydrosphere, but climate scientists usually treat it as a separate component of the climate system because its physical properties differ from those of water and water vapor. The land surface does not include water- or ice-covered surfaces but consists of all other vegetated and non-vegetated surfaces. The biosphere is the realm of life and is found in all other natural components, especially the hydrosphere and land surface. The biota is made up of and requires the presence of air, water, and mineral matter – that is, material from the atmosphere, hydrosphere, and land – to exist. Several external forces influence the five climate system components, with radiation from the Sun being the most important. Climate scientists consider the impact of human activities on the climate system another example of external forcing.

Why is understanding climate Important?

Everything in the lighter shading would be flooded in the transition from the ice age to the modern pre-industrial climate (Figure 12.1.3). However, what sort of effort would that have taken? It turns out that the natural increase in atmospheric carbon dioxide that led to the thaw after the last Ice Age was an increase from 180 parts per million (ppm) to about 280 ppm. This was a smaller increase than the present-time increase due to human activities, such as fossil fuel burning, which thus far have raised carbon dioxide levels from the pre-industrial value of 280 ppm to a current level of over 400 ppm–a level which is increasing by 2 ppm every year. So, arguably, if the dawn of industrialization had occurred 18,000 years ago, we may very likely have sent the climate from an ice age into the modern pre-industrial state.

How long it would have taken to melt all of the ice is not precisely known, but it is conceivable it could have happened over a period as short as two centuries. The area ultimately flooded would be considerably more significant than that currently projected to flood due to the human-caused elevation of carbon dioxide that has taken place so far. The hypothetical city of “Old Orleans” would have to be relocated from its position in the Gulf of Mexico 100+ miles off the coast of New Orleans to the current “New Orleans” location.

By some measures, human interference with the climate back then, had it been possible, would have been even more disruptive than the current interference with our climate. Nevertheless, that interference would merely be raising global mean temperatures from those of the last Ice Age to those that prevailed in modern times before industrialization. This thought experiment tells us that the issue is not whether some particular climate is objectively “optimal.” The issue is that human civilization, natural ecosystems, and our environment are heavily adapted to a particular climate – in our case, the current climate. Rapid departures from that climate would likely exceed the adaptive capacity that we and other living things possess, and cause significant consequent disruption in our world. 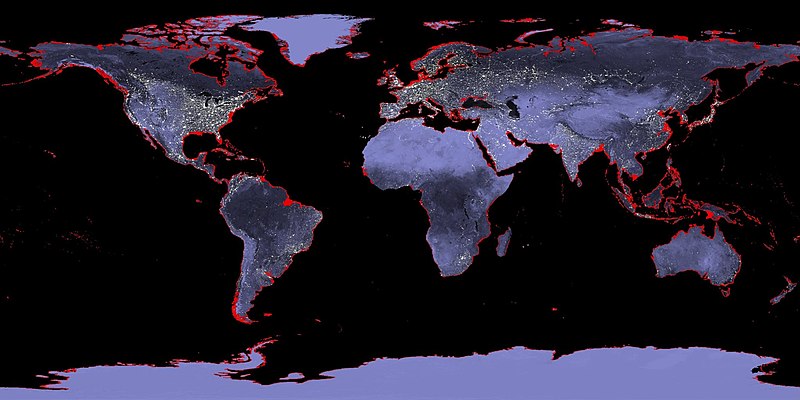 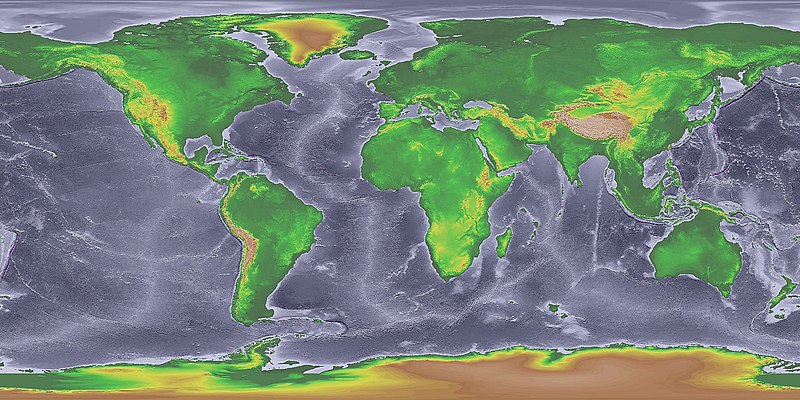 Figure 12.1.2: “Global Sea Levels during the last Ice Age” by NOAA is licensed as Public Domain. 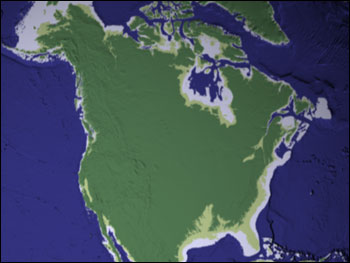 As temperatures dropped and more and more of the Earth’s water began to be tied up in the massive polar ice sheets, sea levels dropped. The map of North America (labove) shows the familiar outline of modern sea levels (light green) as well as sea levels at the peak of the Pleistocene ice age (blue) and the sea level that would result if the polar ice caps melted (dark green). (Images by Robert Simmon, NASA GSFC)