Mitigation and modification of coastal change

There are various modifications that we make to influence beach processes for our purposes. Sometimes these changes are effective and may appear to be beneficial, although in most cases, there are unintended negative consequences that we do not recognize until much later. (4) In this section, we will mention some of the most common beach interventions intended to stop coastal erosion.

A Seawall is a wall or embankment to protect the shore from erosion or to act as a breakwater. They are enjoyable amenities for the public, but they have geological and ecological costs. When a shoreline is “hardened” in this way, crucial marine habitats are lost, and sediment production is reduced, which can affect beaches elsewhere. Seawalls also affect the behavior of waves and longshore currents, sometimes with negative results. (1)

Groins have an effect similar to that of breakwaters, although groins are constructed perpendicular to the beach, and they trap sediment while slowing the longshore current. Most of the sediment that forms beaches along our coasts comes from rivers, so if we want to take care of the beaches, we have to take care of rivers. When a river is dammed, its sediment load is deposited in the resulting reservoir, and for the century or two, while the reservoir is filling up, that sediment cannot get to the sea. During that time, beaches (including spits, baymouth bars, and tombolos) within tens of kilometers of the river’s mouth (or more in some cases) are at risk of erosion. (4)

Coasts are prime real estate land that attracts the development of beach houses, condominiums, and hotels. This kind of interest and investment leads to ongoing efforts to manage the natural processes in coastal areas. Humans who find longshore drift is removing sand from their beaches often use groins in an attempt to retain it. (1)

Jetties are another type of shore perpendicular structure and are placed adjacent to tidal inlets and harbors to control inlet migration and minimize sediment deposition within the inlet. Similar to groins, jetties may significantly destabilize the coastal system and disrupt natural sediment regimes (NPS).

Another approach to reduce erosion or provide protected areas for boat anchoring is the construction of a breakwater, an offshore structure against which the waves break, leaving calmer waters behind it. Unfortunately, this means that waves can no longer reach the beach to keep the longshore drift of sand moving. The drift is interrupted, the sand is deposited in the quieter water, and the shoreline builds out, forming a tombolo behind the breakwater, eventually covering the structure with sand, rendering it obsolete. (1)  During WWII, the U.S. Navy built a series of breakwaters just offshore of Long Beach, California, in order to maintain a deep port and serve as a deterrent to enemy submarines (Figure 8.6.3).  While it served its purpose, it changed the dynamics of the beach itself, halting wave formation and destroying habitat.  Additionally, trash and debris from the Los Angeles River builds up in the marina and cannot escape.

Sand for longshore drift and beaches comes from rivers flowing to the oceans from inland areas. Beaches may become starved of sand if sediment carried by streams and rivers is trapped behind dams. To mitigate, beach replenishment may be employed where sand is hauled from other areas by trucks or barges and dumped on the depleted beach. Unfortunately, this can disrupt the ecosystem that exists along the shoreline by exposing native creatures to foreign sandy material and foreign microorganisms and can even bring in foreign objects that impact humans on replenished beaches. Visitors to one replenished east coast beach found munitions and metal shards in the sand which had been brought from abandoned test ranges from which the sand had been dredged. (1) 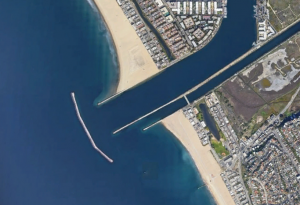 Humans affect the ocean in a variety of ways. Laws, regulations and resource management affect what is taken out and put into the ocean. Human development and activity leads to pollution, changes to ocean chemistry (ocean acidification) and physical modifications (changes to beaches, shores and rivers). In addition, humans have removed most of the large vertebrates from the ocean. (0)

The ocean provides tremendous economic resources to the people of the world, and therefore humans will continue to affect it.  Sustainable development of the ocean can occur with some efforts.

Video 8.6.1 This video provides a summary of the threats to our ocean followed by solutions. At this time, we need to come together as one planet with one ocean to agree on how to best take care of it. And you have a part on it too!